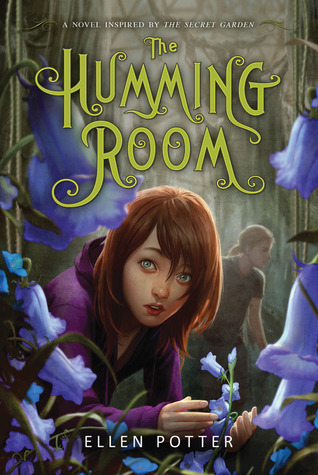 Hiding is Roo Fanshaw’s special skill. Living in a frighteningly unstable family, she often needs to disappear at a moment’s notice. When her parents are murdered, it’s her special hiding place under the trailer that saves her life.

As it turns out, Roo, much to her surprise, has a wealthy if eccentric uncle, who has agreed to take her into his home on Cough Rock Island. Once a tuberculosis sanitarium for children of the rich, this strange house is teeming with ghost stories and secrets. Roo doesn’t believe in ghosts or fairy tales, but what are those eerie noises she keeps hearing? And who is that strange wild boy who lives on the river? People are lying to her, and Roo becomes determined to find the truth.

Despite the best efforts of her uncle’s assistants, Roo discovers the house’s hidden room–a garden with a tragic secret.

Inspired by The Secret Garden, this tale full of quirky characters, mysterious secrets, and surprising growth is a story that only Ellen Potter could write.

This book was seriously difficult for me to rate. I have gone back and forth between 3 & 4 stars…it really makes me wish for those illusive half stars. Anyway, I digress.

The Humming Room is truly an excellent take on a retelling of The Secret Garden, which I haven’t read since I was a child. Although I haven’t read it in so long, I absolutely recognized the general feel & ambiance of the classic tale. Ellen Potter captured it perfectly. And I really do appreciate what she has done for young readers with this book. She took a classic tale & updated it, making it more accessible for young readers. I won’t go so far as to say they should read this in lieu of the original, but I think it will encourage them to “tackle” the classic, if you will.

Where this book really shined for me was in Ellen Potter’s gorgeous writing and in particular, in Roo’s character. There were certain passages describing the island or the garden that were just so beautiful & atmospheric that I was just transported there as I read. This is definitely a must-read for nature lovers, and this is especially evident with Roo’s character. I really loved Roo, and even though I didn’t find her growth as drastic as I had hoped, I still found her story to be sweet & redemptive…not to mention, I adored her love of nature.

I guess where this fell to 3 stars for me is that it felt too short. For one, I felt like the ending was too abrupt. Also, the plot as a whole felt sort of rushed, and there were a good amount of things left unexplained. Plus, there were a couple side characters who I felt were just kind of thrown into the story. A few were mentioned almost in passing, and I wish we would have seen more of them. There was one in particular who, even though he was definitely prevalent in the second half of the story, I just felt like we never got to really understand his purpose. (I don’t want to mention names for fear of spoilers.) Granted, this all could be due to the fact that I read this as an adult. However, I think my feeling of disconnect could have been solved with just an extra 50 pages.

Again, I will say that as a whole, I thought this was an excellent rendition of The Secret Garden and a worthwhile read for young readers. There were a few things that kept me from loving this one, but I think kids would really be able to use this book as a spring board to expand their literary horizons.